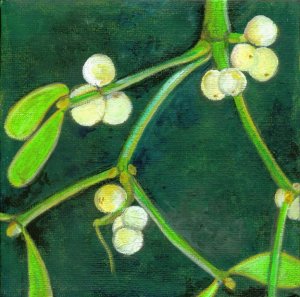 Don’t you like mistletoe? I think it’s a cute plant.
Did you know that it grows as a parasite attached to the branches of a tree or shrub? It first sprouts from bird faeces on the trunk of the tree and then grows within the branches.
Numerous animals depend on mistletoe for food, consuming the leaves and young shoots, transferring pollen between plants, and dispersing the sticky seeds. Also many many birds nest in mistletoe.

“Mistletoe leaves and young twigs are used by herbalists, and it is popular in Europe, especially in Germany, for treating circulatory and respiratory system problems, and cancer. Mistletoe is being studied as a potential treatment for tumors. Although such use is not yet permitted in the U.S., mistletoe is prescribed in Europe as an alternative cancer treatment.

Mistletoe has been used to treat hypertension, headaches, menstrual symptoms, and arthritis. The first reference to its medical use is in the Bible as a cure for epilepsy. The young King David is said to have seen a woman collapse in a fit. An angel appeared to him as he prayed for a remedy, announcing “Whoever wears the oak mistletoe in a finger ring on the right hand, so that the mistletoe touches the hand, will never again be bothered by the falling sickness.” Today, despite the lack of robust data supporting the use of mistletoe as an anticancer drug, it is widely used in middle Europe; around 23m (£16m; $30m) is spent on the preparation each year, and up to two thirds of oncology patients use it.” [Ernst, E. (2006). Mistletoe as a treatment for cancer. BMJ 333: 1282-1283]